This is Sophia Khan writing a guest Historical Sew Fortnightly post. Like Erin I am also interested in early 20th century fashions. I decided to research Mina Loy a "Futurist, Dadaist, Surrealist, feminist, conceptualist, modernist, and post-modernist". She was part of a Bohemian circut of artists that lived in Greenwich Village and had a long and interesting life. I wanted to make a garment that embodied both her life and some of the verse contained in the poem Giovanni Franchi. 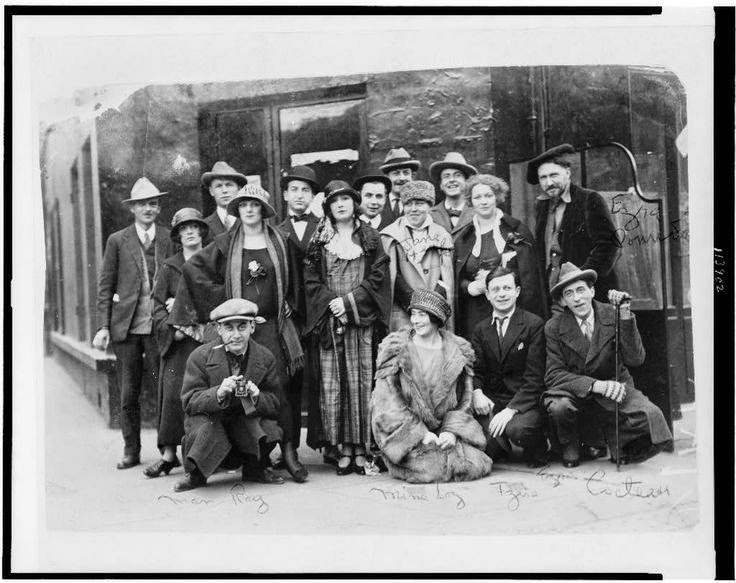 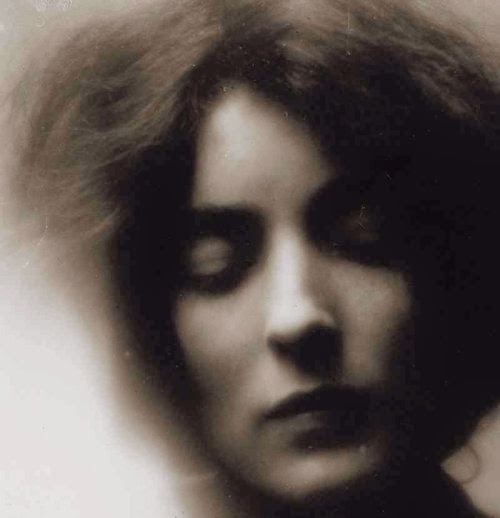 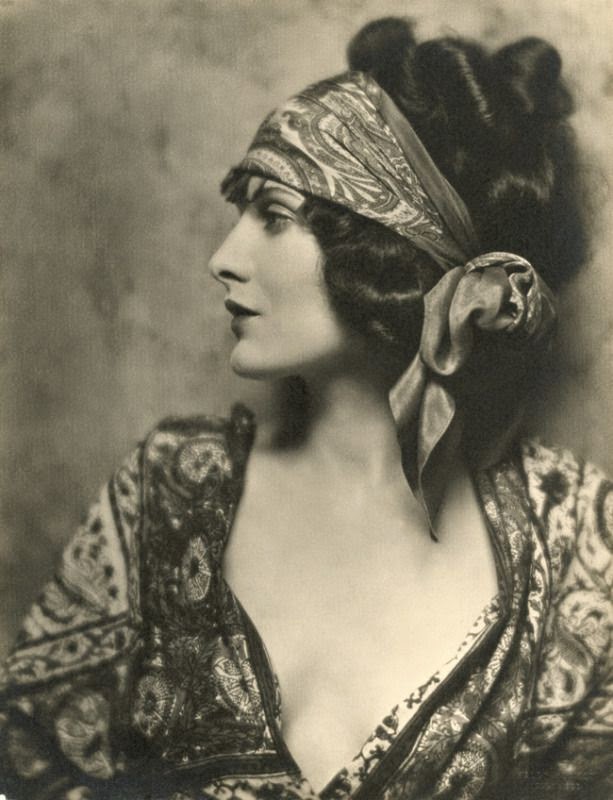 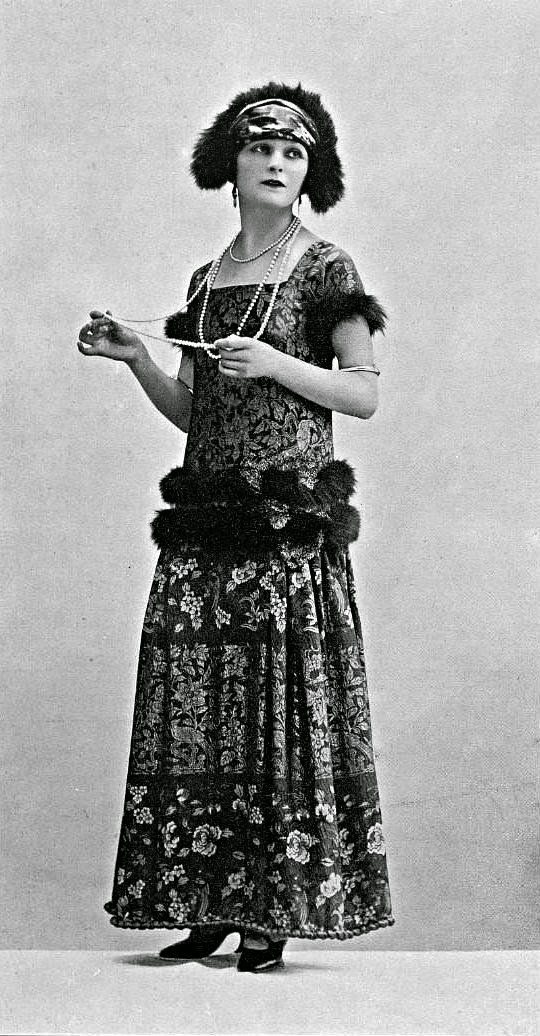 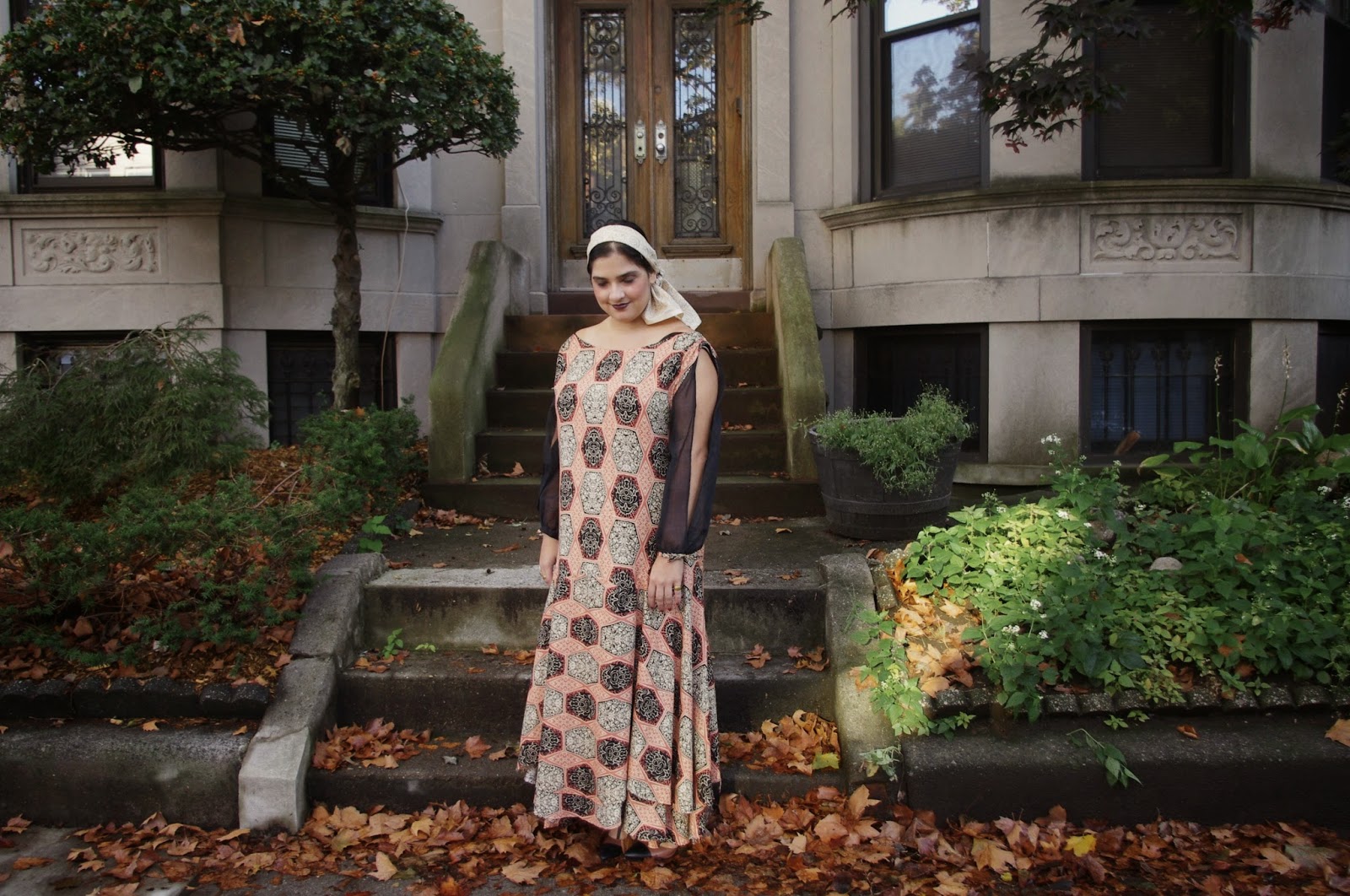 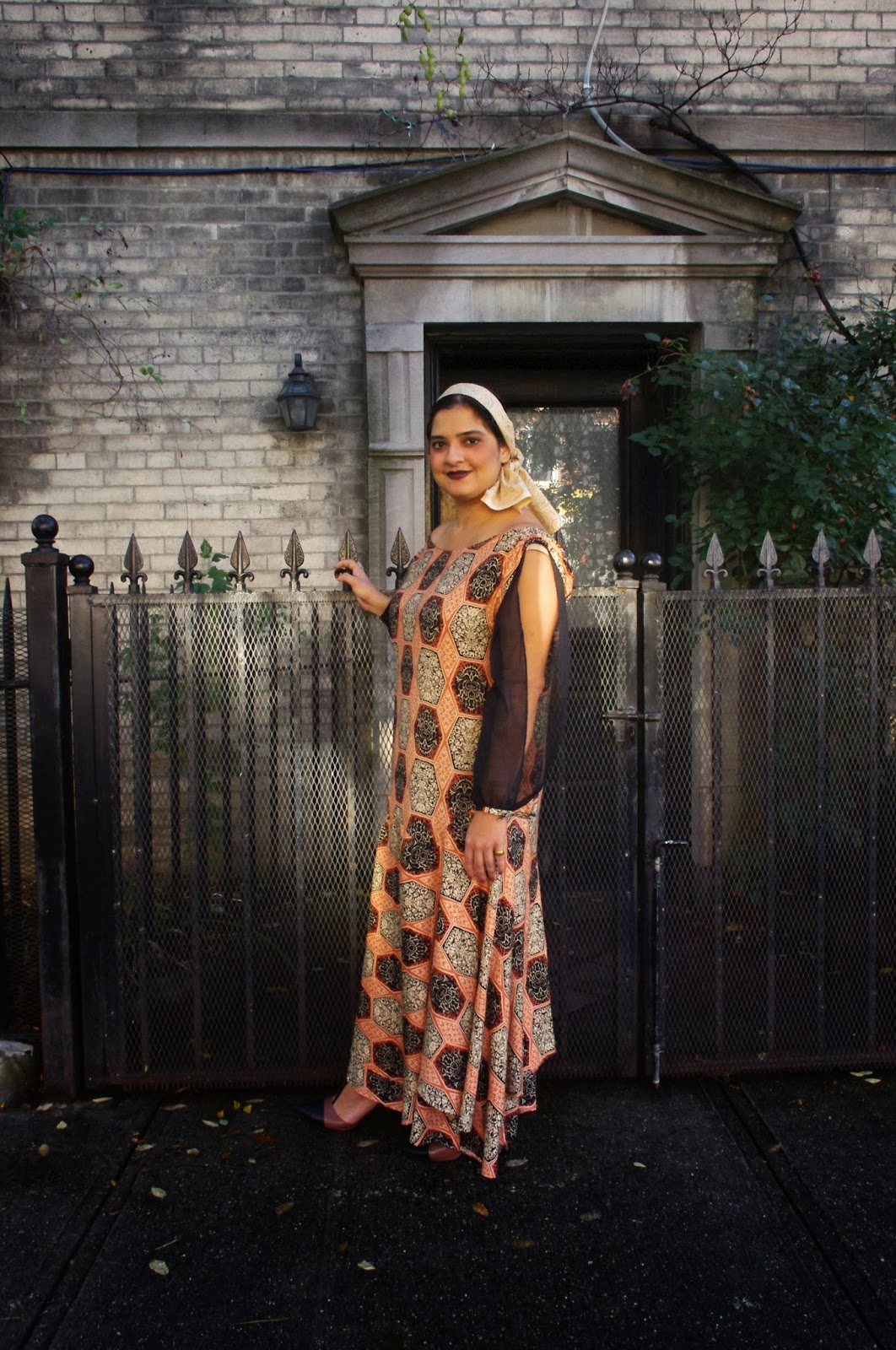 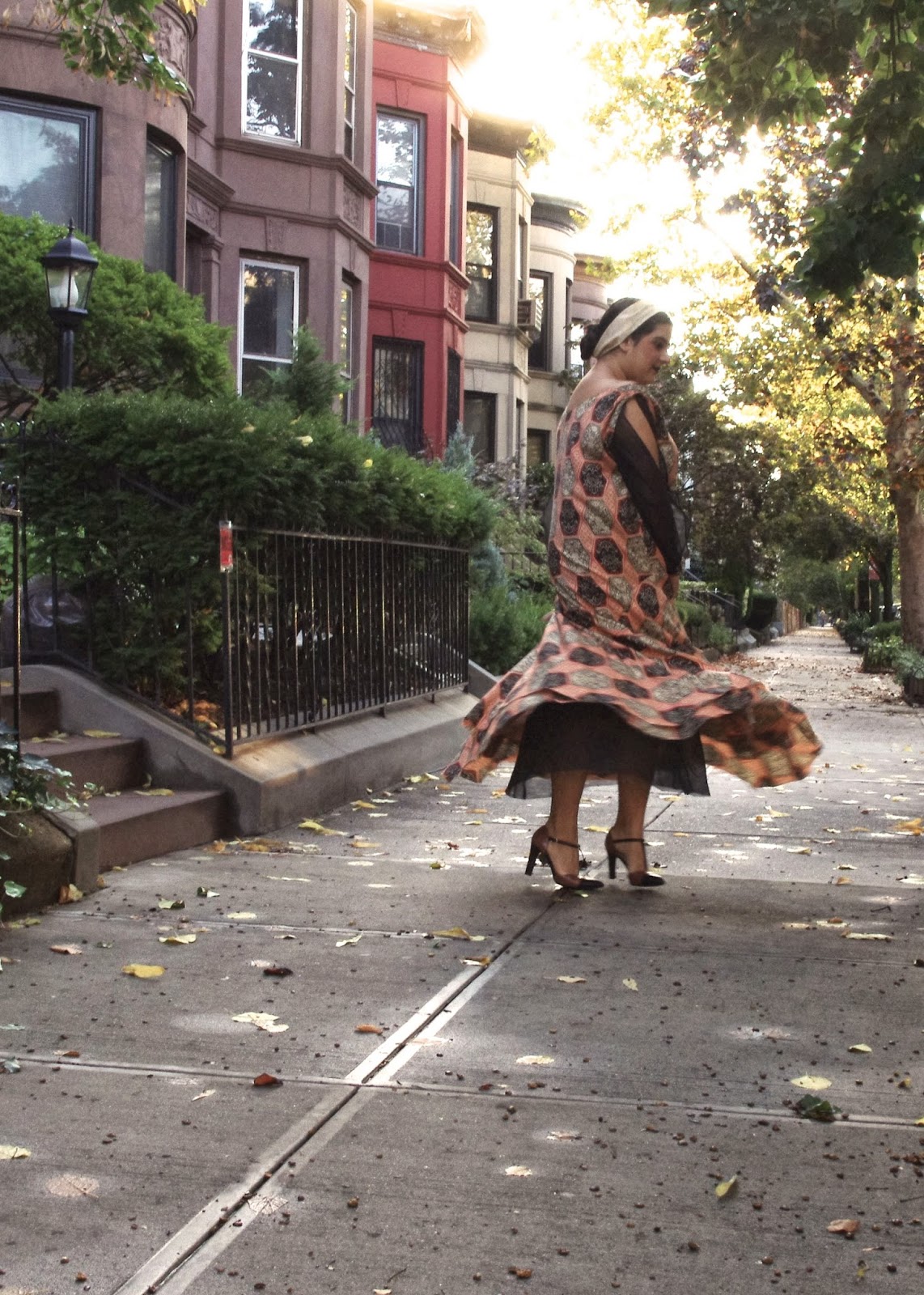 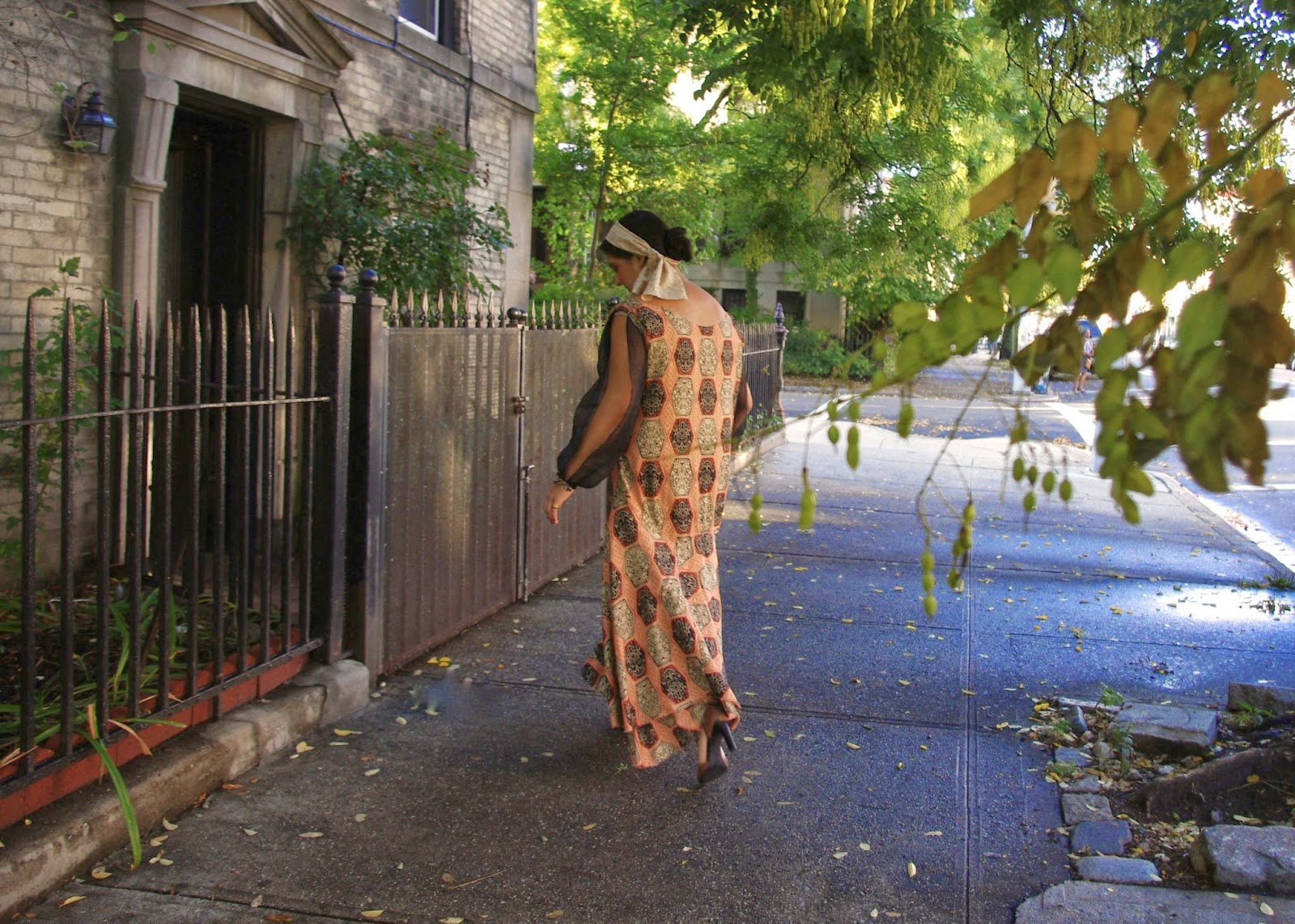 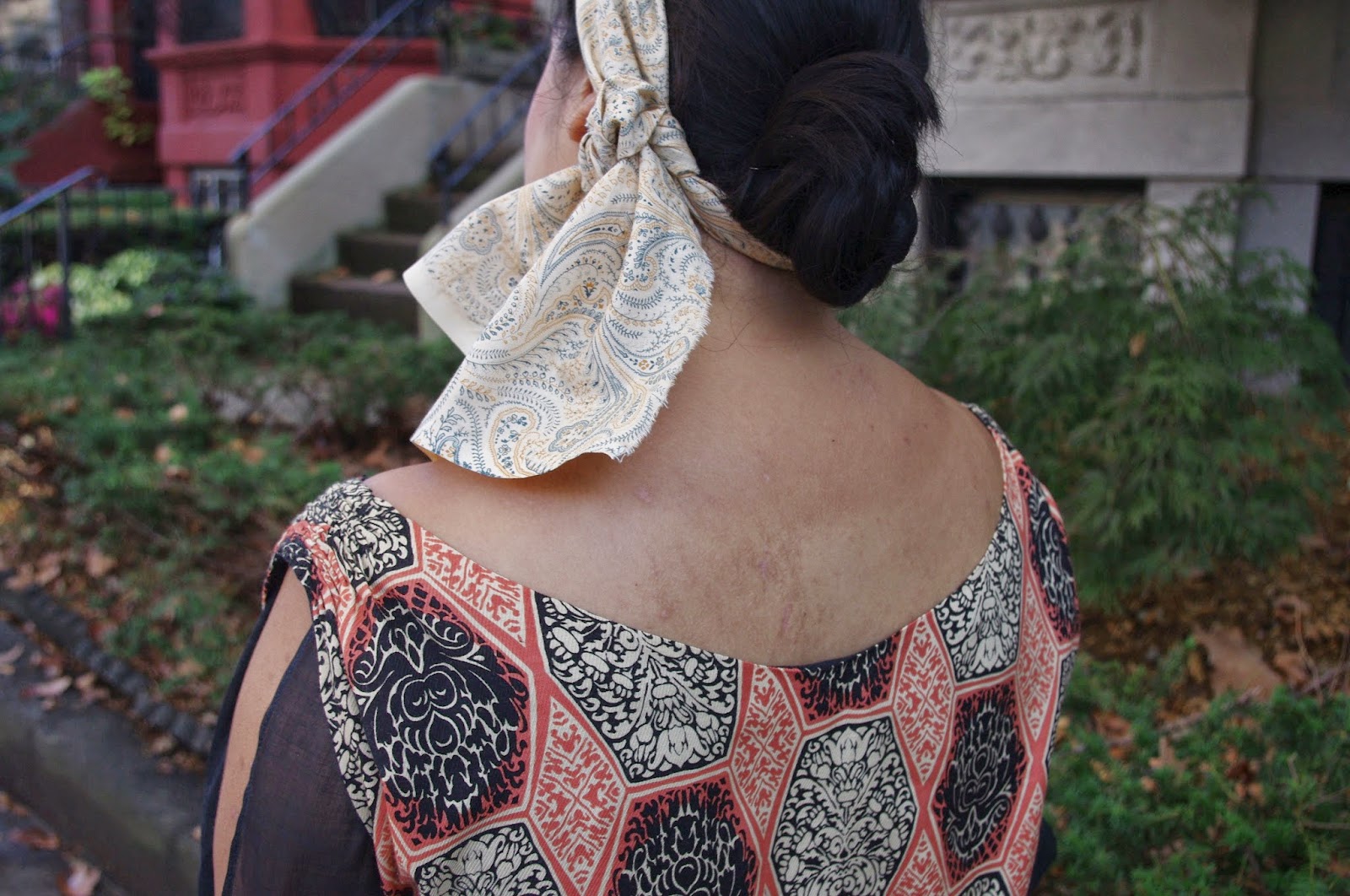 Challenge: 18, Poetry in MotionPoem: Giovanni Franchi by Mina Loy
What: Gown and Underdress circa 1919-1923

How Historical Accurate: Around 90% sewing techniques and fabric was available by the late teens the only thing I am missing is a picot hem.

More info on the pattern to come!
Posted by Erin at 4:14 PM 3 comments:

At the start of this year's HSF, I had the goal of making two 1920's dresses for two days of Governor's Island Jazz Age Lawn Party. As I was putting together my Pinterest board of inspiration for the year, one dress in particular stood out as 'the ONE'  - a Lanvin dress from 1923.

I was going to make it for the Pink challenge at the beginning of the year - but as I started looking it turned out to be almost impossible to find this quality of ribbon. I bought vintage lengths from a few different vendors online, but the widths and the yardage weren't right or enough. It seems that ombre ribbon like this is no longer in production, so each time I found a style that could have worked it was in such limited quantity to make it unusable.

Finally, months later, I came across a vendor that was able to sell me 125 meters (I bought out the stock!) and I was able to get to work. 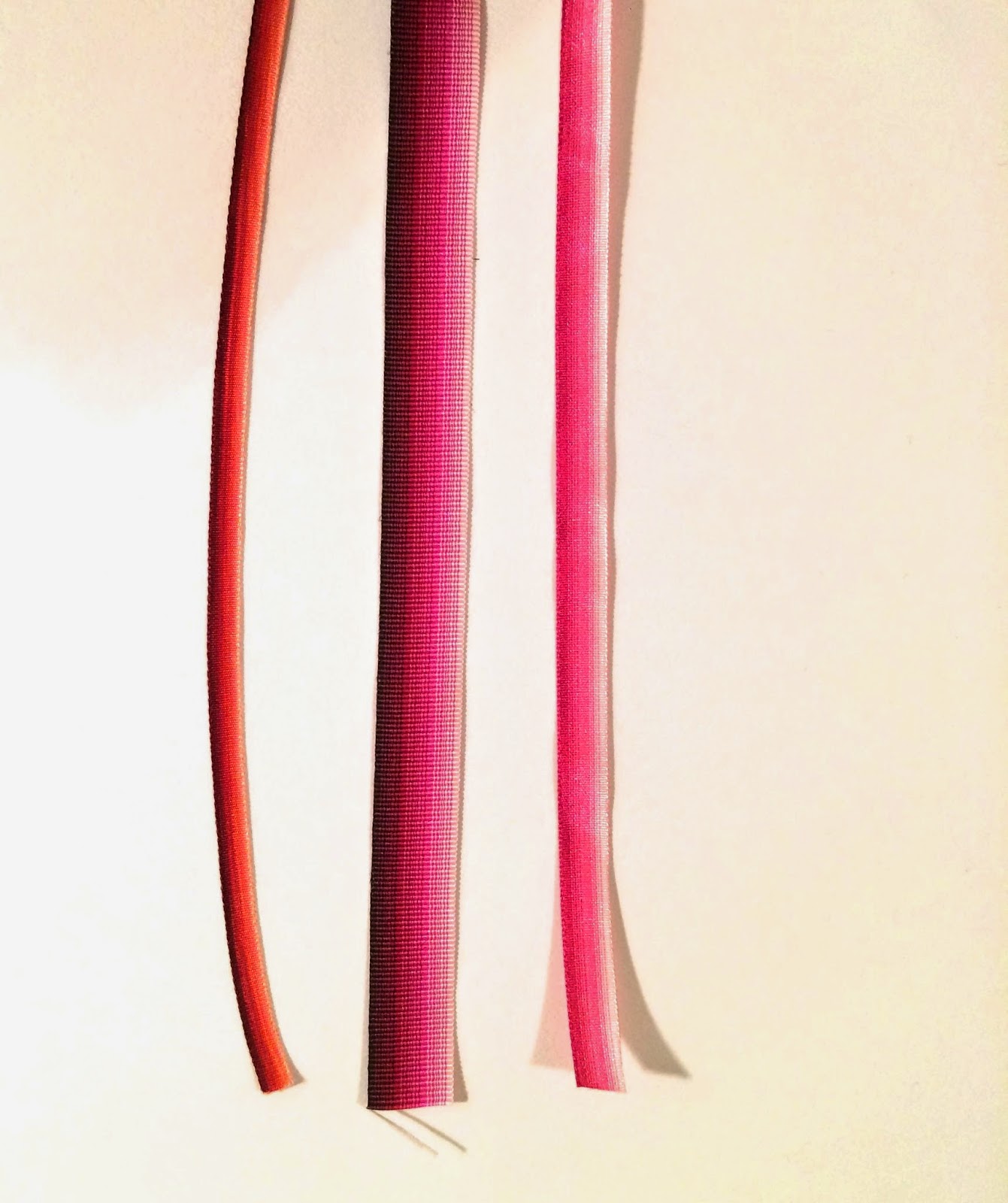 (the ribbon on the left is the final choice!)

The shape is fairly simple so I made the pattern myself. Unfortunately, my sewing machine was not so interested in sewing the ribbon to the net so had no choice but to hand stitch everything together.

I didn't take too many "in-progress" photos, to be honest it wasn't that interesting, but in these you can see the process of laying out the pattern: 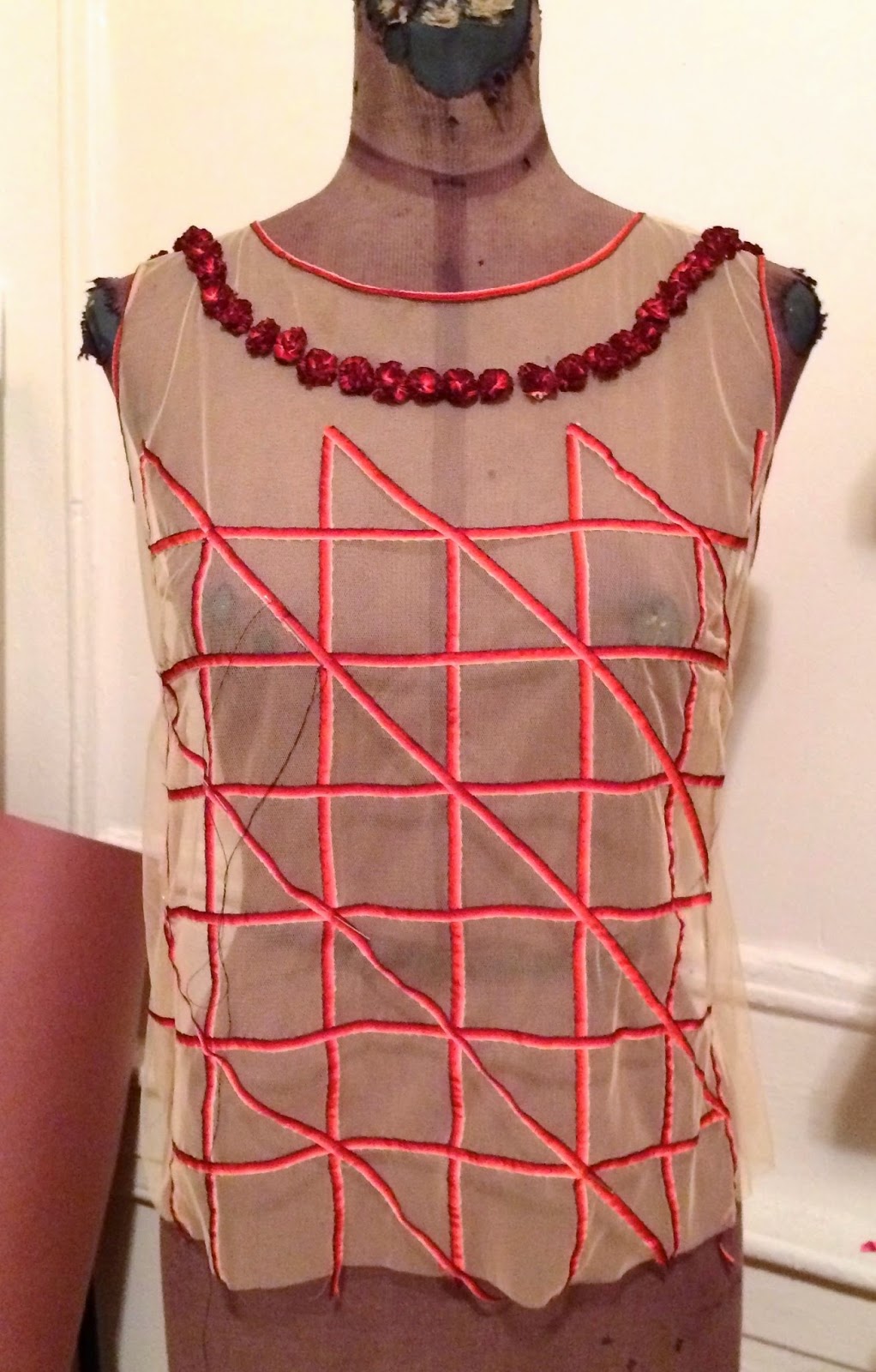 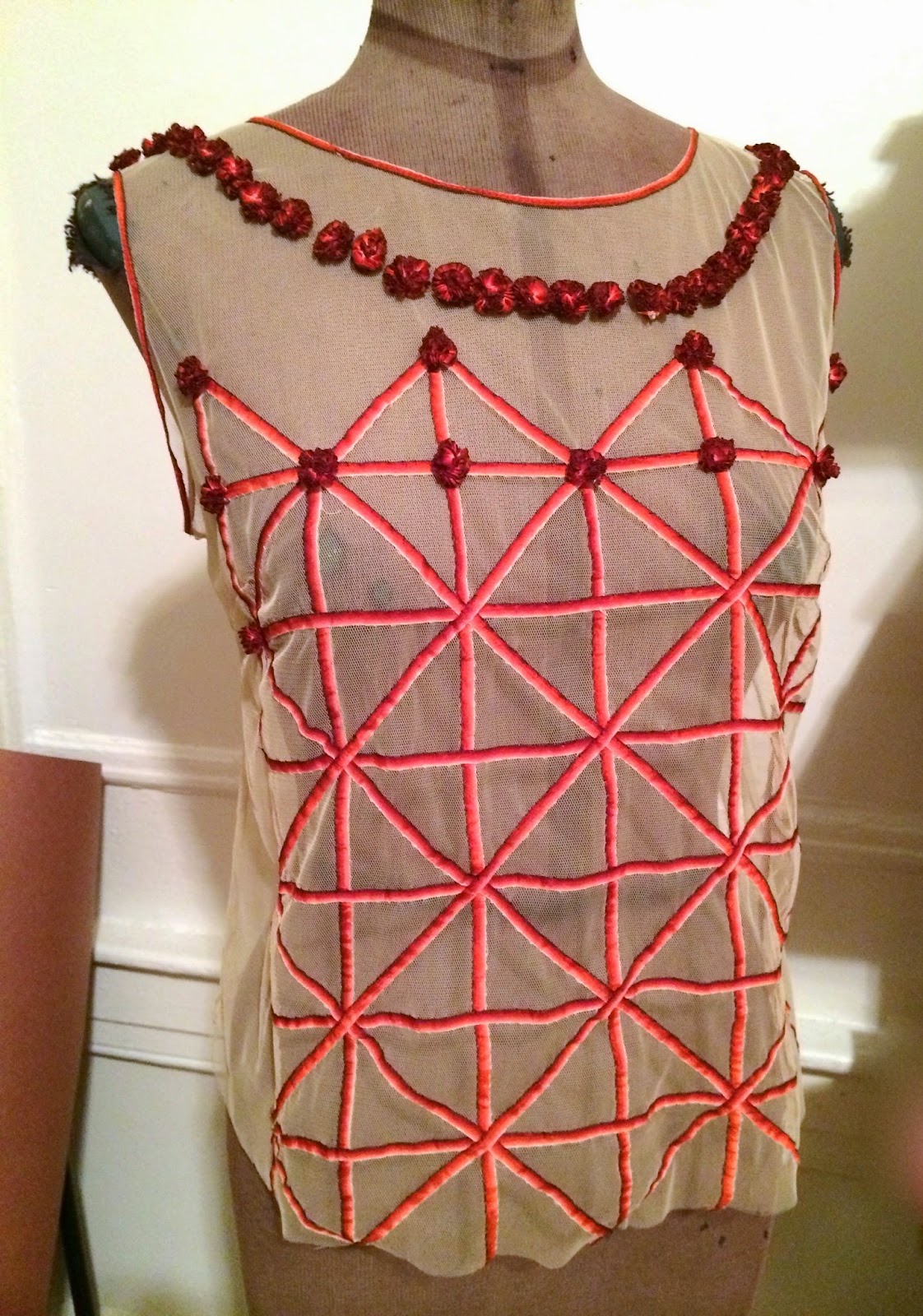 And finally, seasons and seasons of Murder, She Wrote later: the finished product! 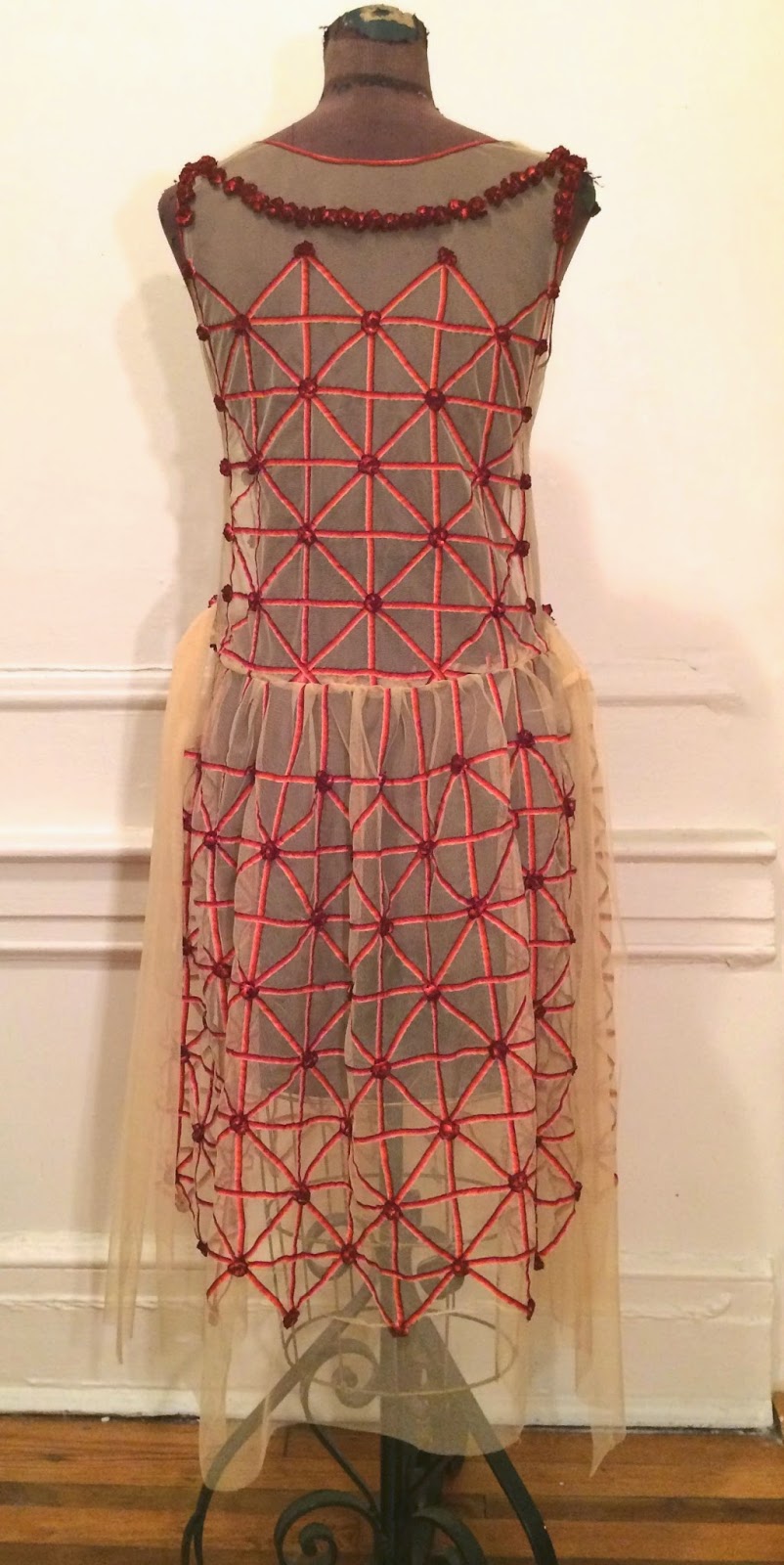 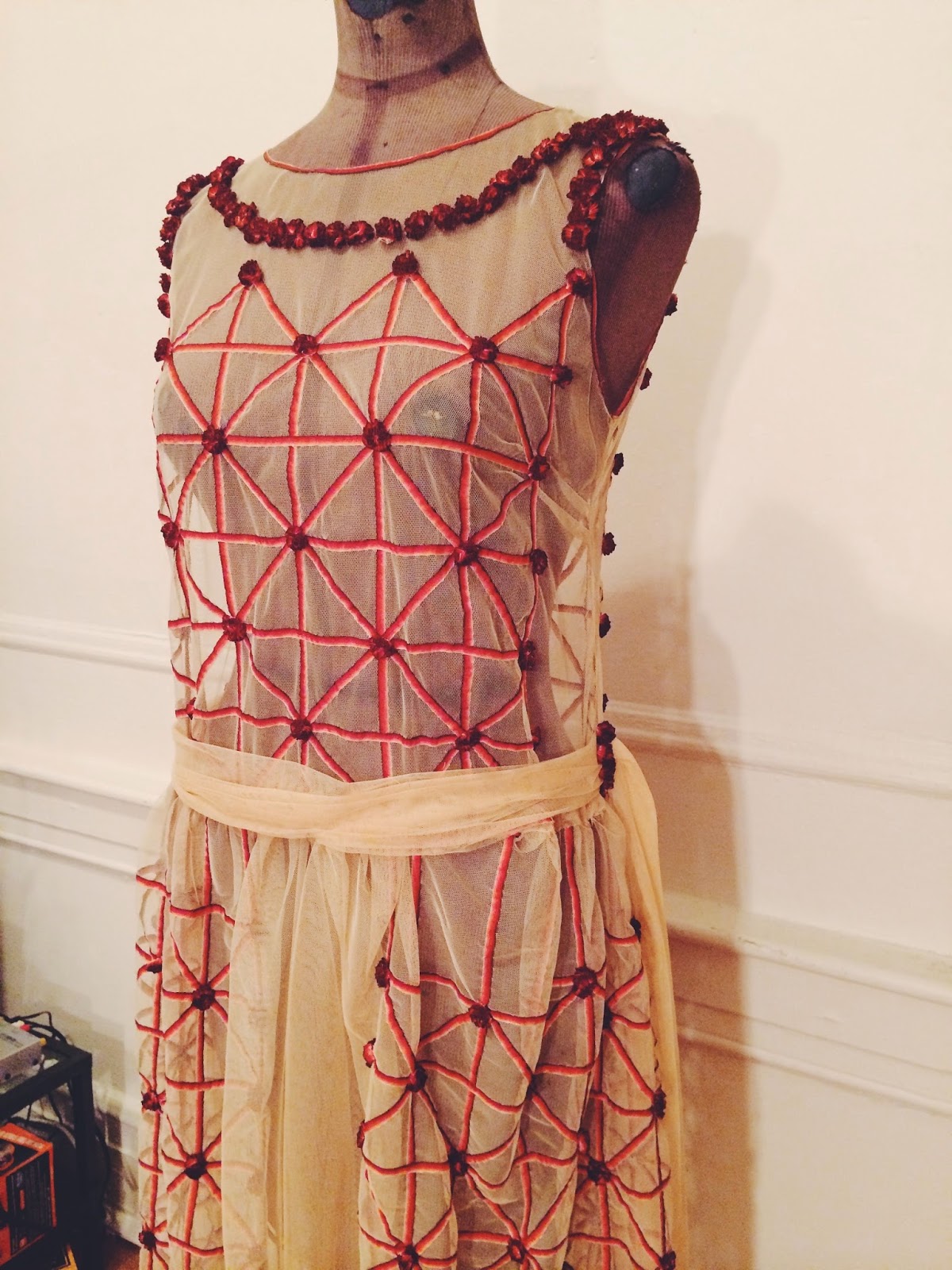 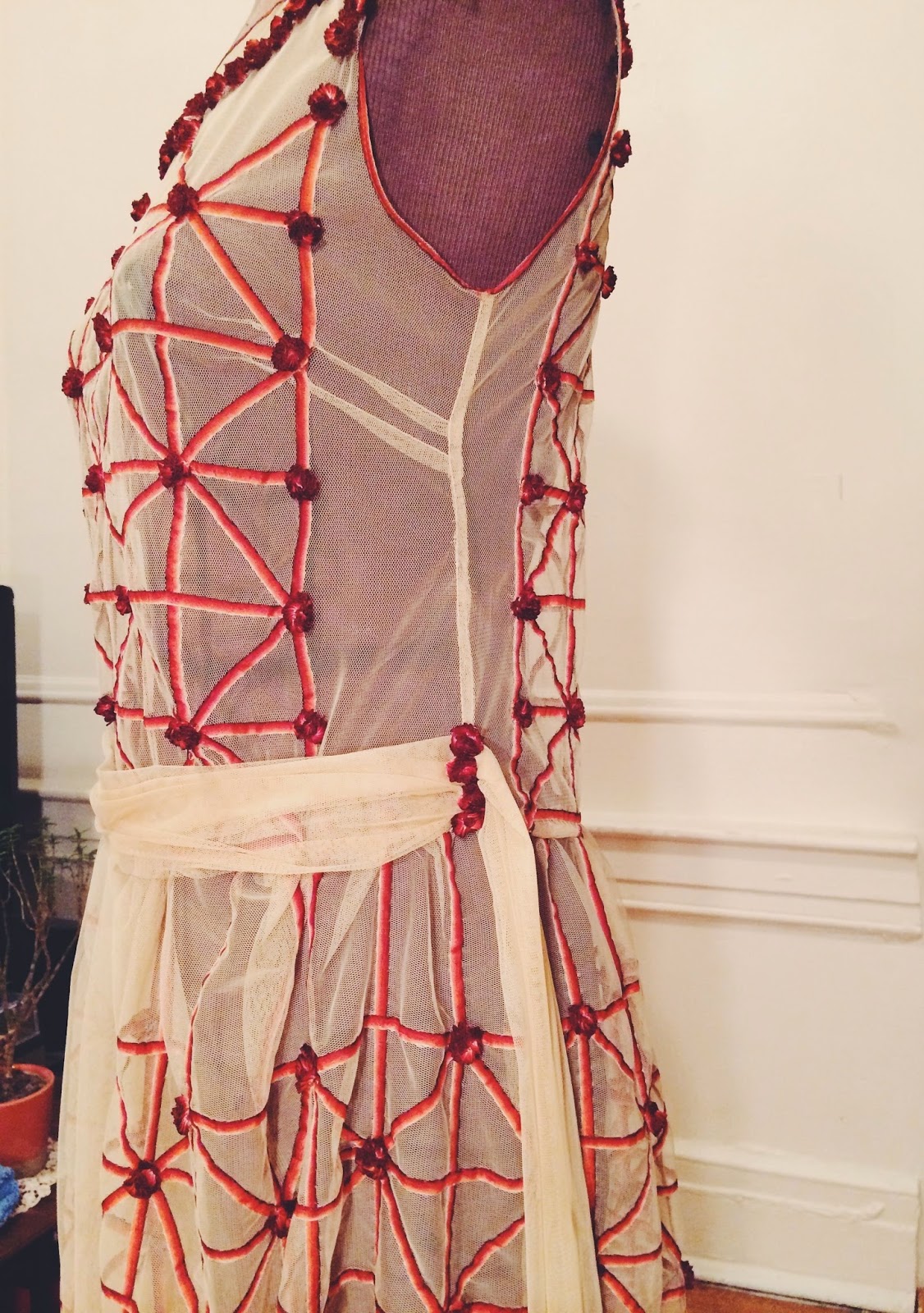 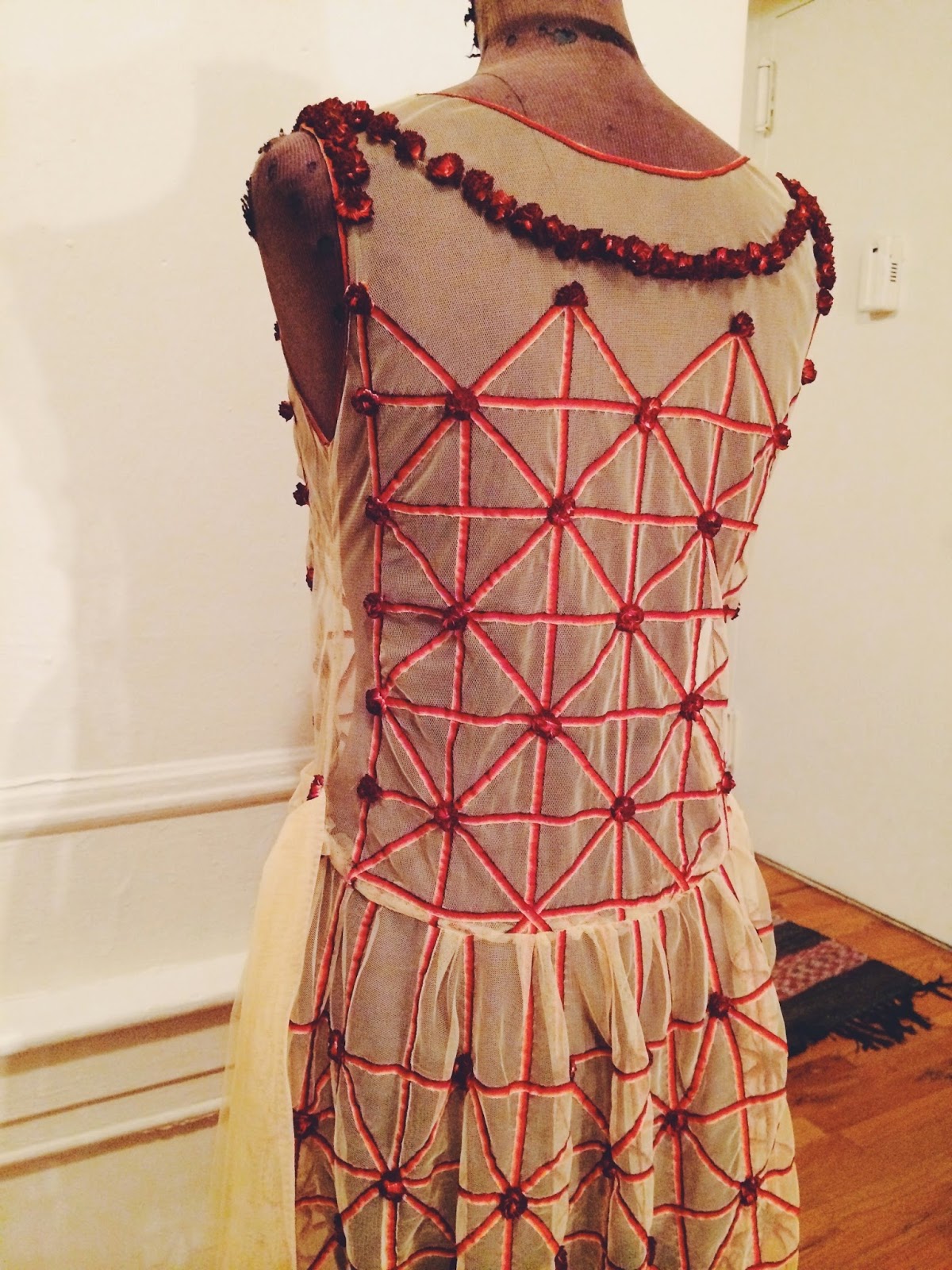 I did eventually run out of ribbon so I wasn't able to make the flowered waist band as the original garment. Instead, I made a half-belt with side falls from extra tulle at the hem. Also, not pictured is the slip to match, as it wouldn't fit on the dress form.

Here is a bonus candid photo of me from the party: 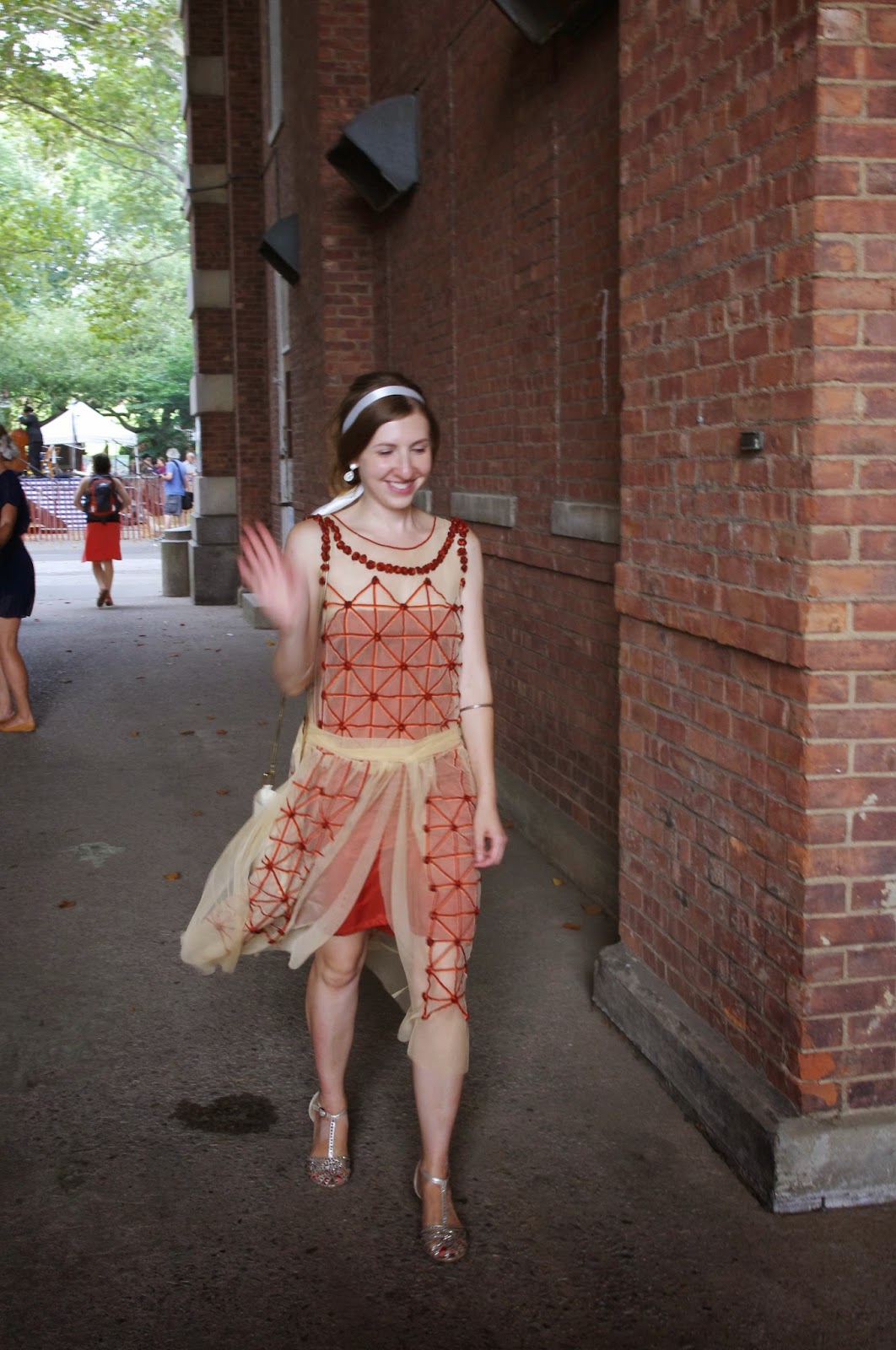 And now for the roundup:

What the item is: Lanvin-inspired Summer Dress

The Challenge: The Great Outdoors

How historically accurate is it? I would say 90% - all the insides are French seamed and the ribbon is hand-sewn, so although I'm not sure how the original is made, it technically could have been made this way. I'll take off points as I'm not sure what content of either the ribbon or the net are.

Hours to complete: 150+, it was a few weekends of sewing and most of the flowers were gathered on the subway during my commute to work. I started sewing in early June and finished on August 15th.

For the second HSF challenge I chose a Vionnet dress from the Betty Kirke book. The original is a gorgeous piece that's housed at the Met, but unfortunately poorly photographed on the collections website (see second photo). 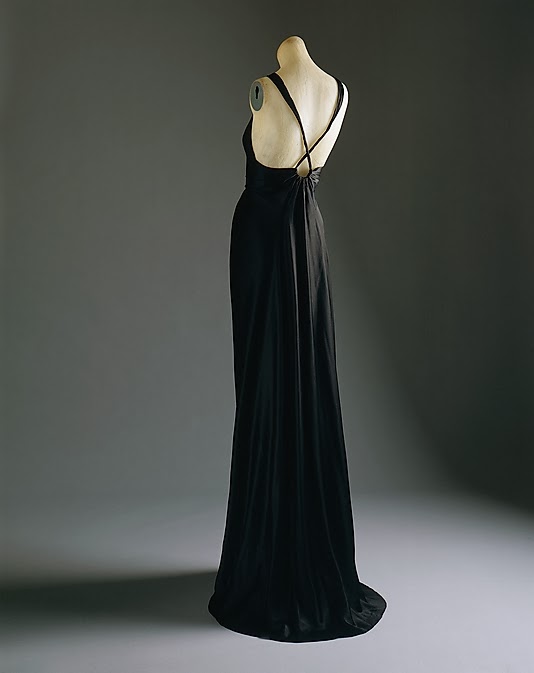 I was so excited to start making dresses from this book, but when I went to start enlarging this one I realized that there was no scale instruction. After a bit of research, I found out that there is a Japanese companion book to this one which accurately scales the patterns and gives better sewing instructions. I didn't have the budget to buy the book, so luckily I was able to find photographs of it that people had uploaded online.

The original is made from silk crepe-back satin, and when I saw some at the fabric store I fell in love... but at $70/yard was a little over budget. I ended up finding a $35/yard version, and saved some money by buying end of the bolt. When it came time to cut the pattern I fell a little bit short and ended up having to buy the closest color match in a regular silk satin to finish the second half of the dress. It's not too noticeable, but you might be able to tell that it's made from two different fabrics in the photos. In the end it became a really expensive, fully finished muslin... but when I save up some money I might buy the dream fabric and make a second one.

I found the art deco buckle on Ebay. This is my favorite part of the dress - it's really just a big sack that you pull over and cinch with a little buckle that is sewn into the dress. So simple and easy. It's also completely open from the neckline to waist, but there is so much gathering in the front that it somehow is still quite modest.

I was really rushed for photos so I'm not sure if you can see all the details, but here it is! 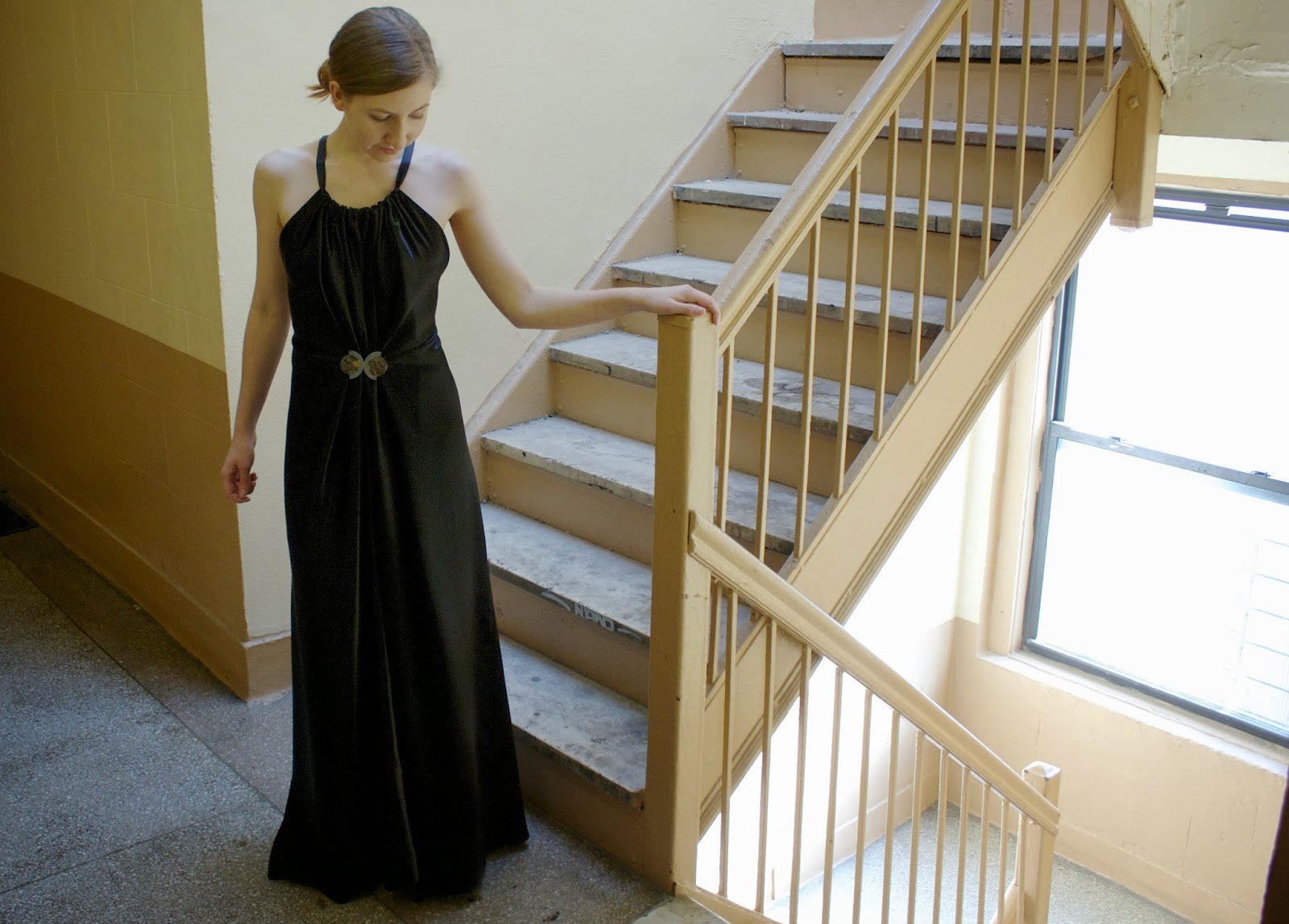 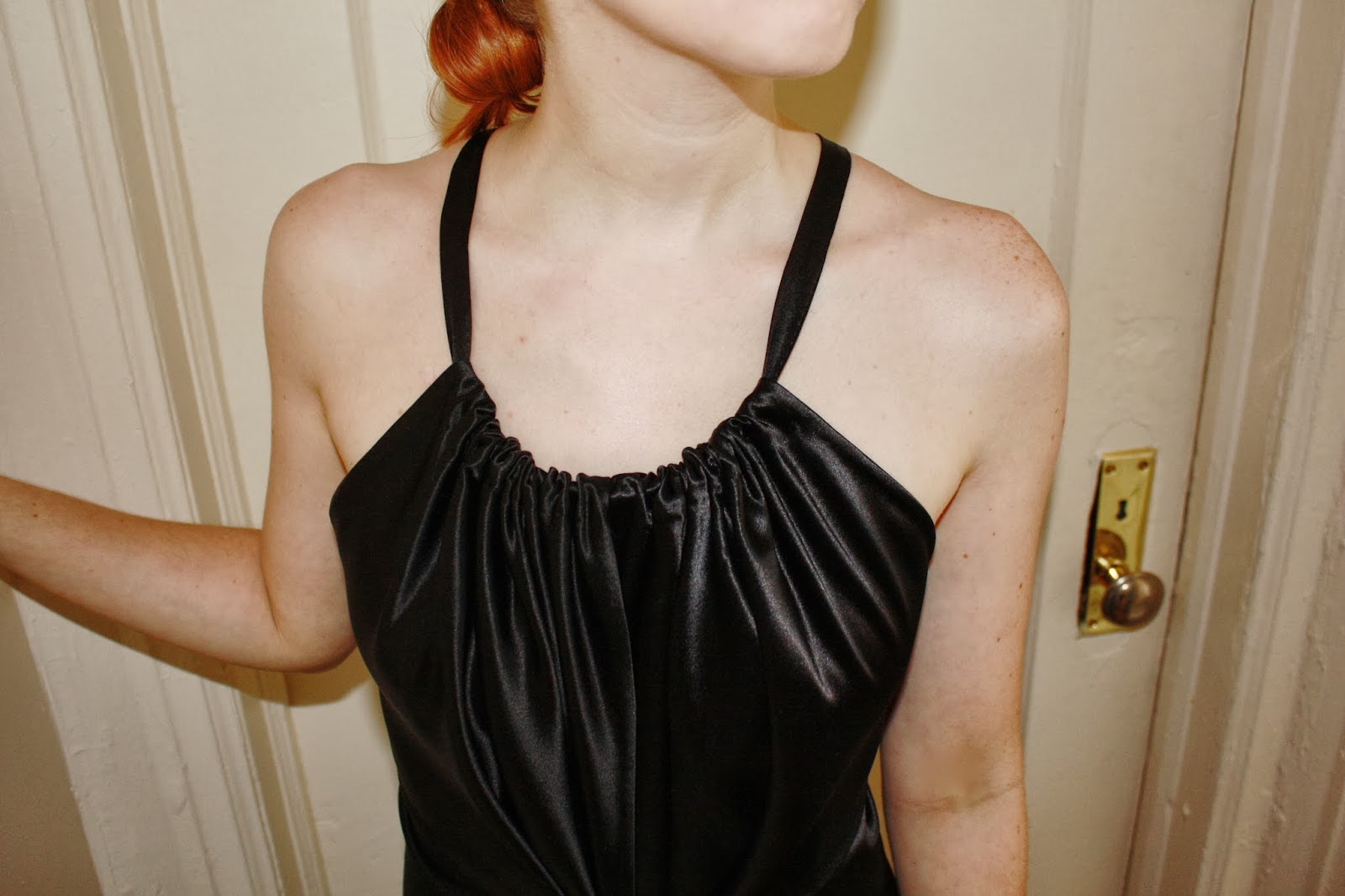 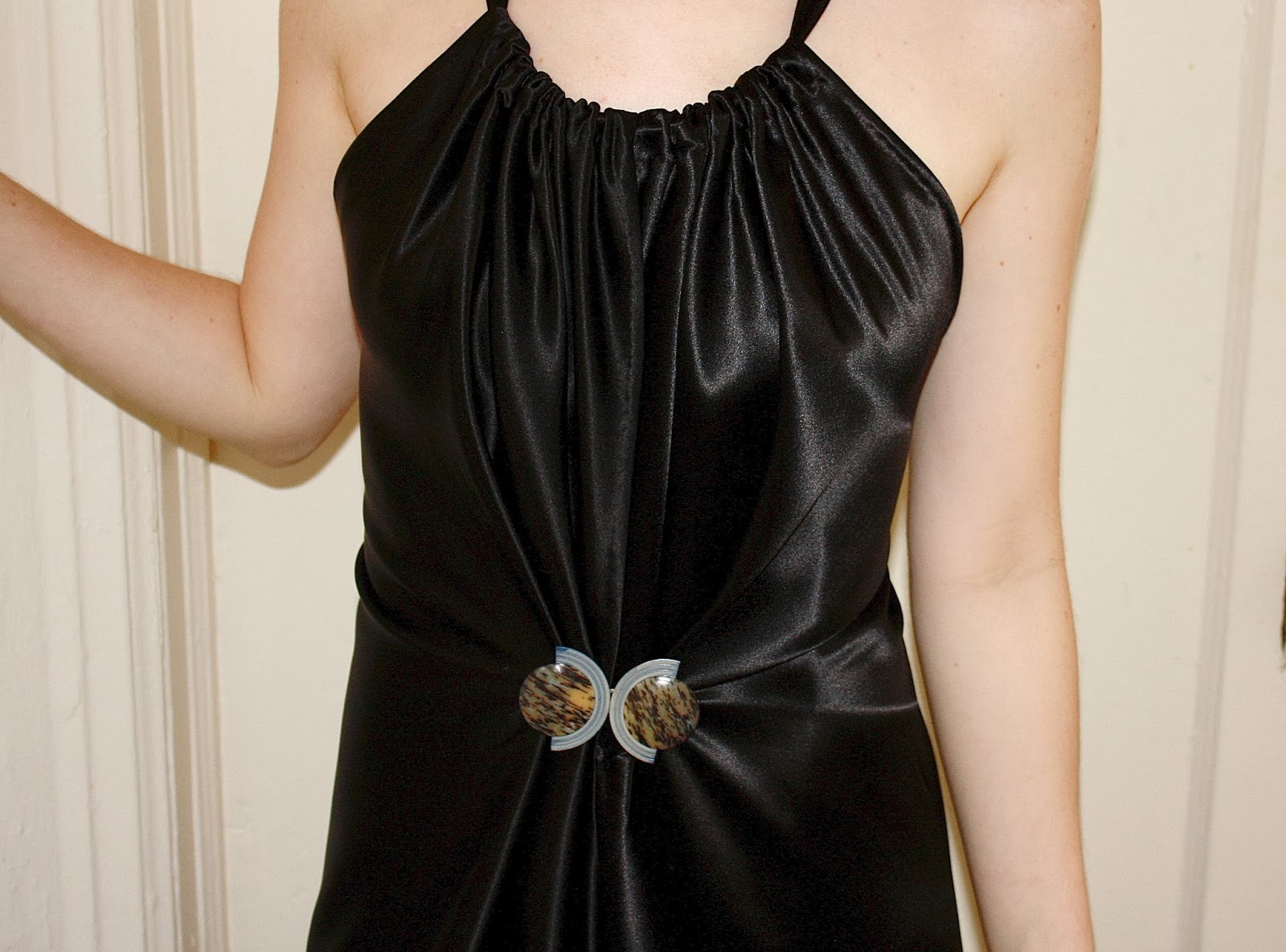 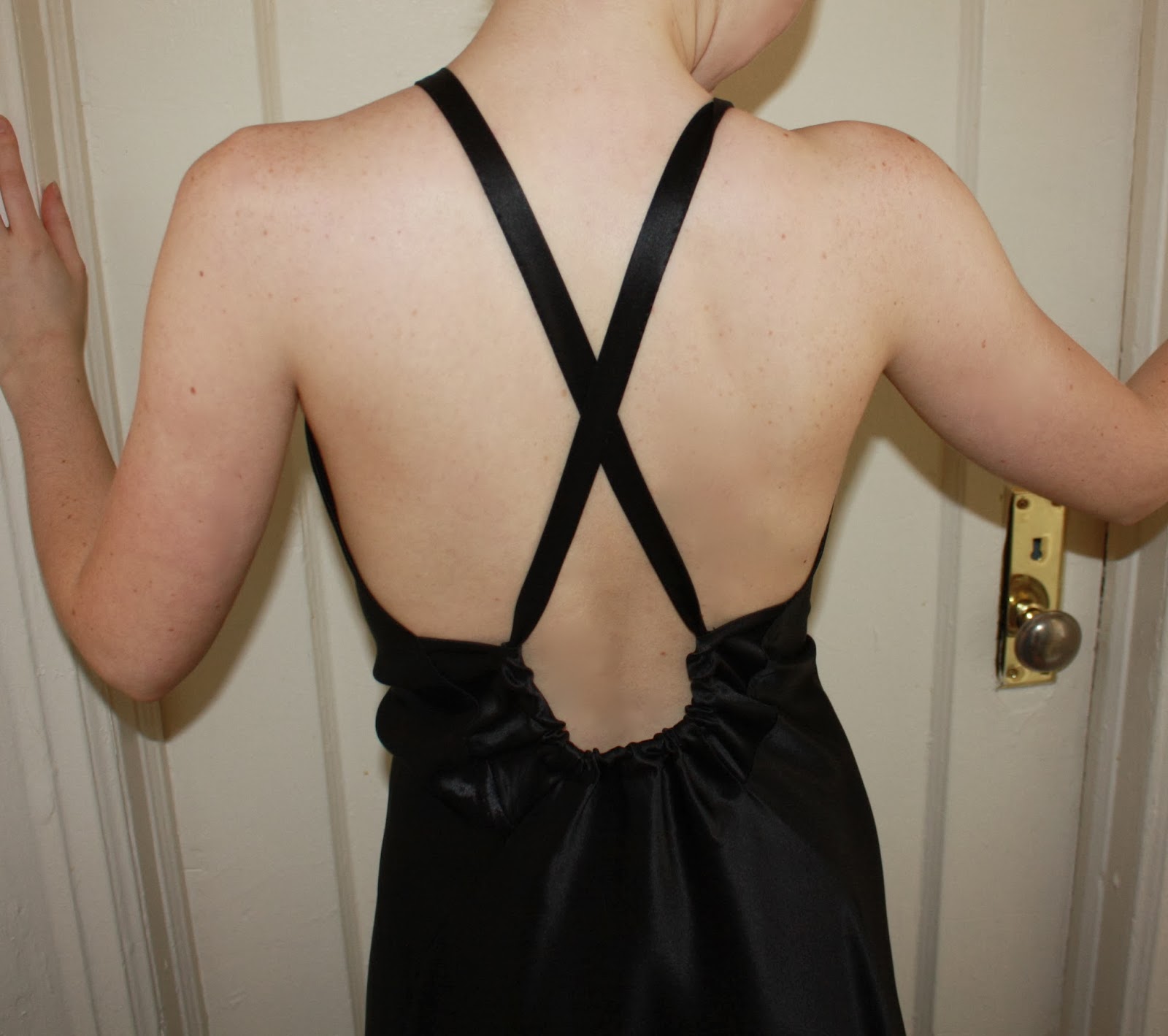 The Challenge: Innovation
Fabric: Silk crepe-back satin, silk satin
Pattern: Pattern 12 from Betty Kirke's Madeleine Vionnet
Year: 1936
Notions: Buckle, Thread
How historically accurate is it? 95%, the fabric is silk and the buckle is from the era, but I'm not sure if the sewing techniques I used are correct.
Hours to complete: About 40, after three mock ups and lots of hand sewing.
First worn: Today, for photos!
Total cost: About $125. Far too much considering I'll have to remake it, but maybe I can reuse the fabric for other projects.
Posted by Erin at 12:13 PM No comments: 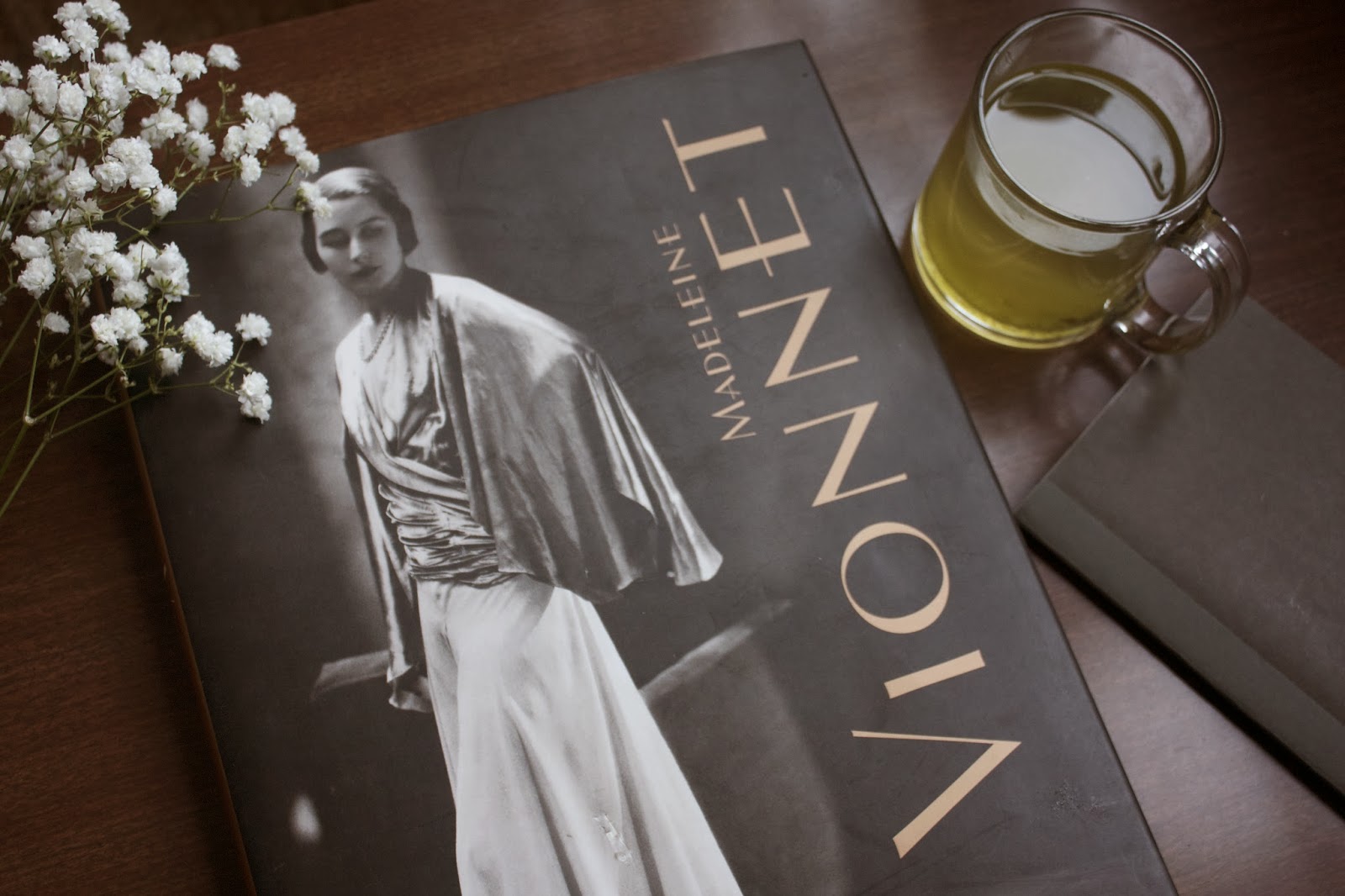 When I was considering innovation in fashion, I thought of how fast the industry adopts new technology today. I work with knitting factories on a daily basis, am constantly learning new techniques and new ways to put a sweater together. One of the reasons that I love what I do is that I get to see the evolution, one idea building off of another to create something unexpected, familiar but different.

Madeleine Vionnet was one of the great innovators of the 20th century for this very reason. She took inspiration from ancient Greek and medieval sources, but used a new technique of draping to achieve a more sophisticated but similar effect. I have always wanted to try to recreate one of her garments (if you have ever seen one of her patterns, you know why!), and thought this might be a great time to test my ability. Luckily, a friend of mine let me borrow his copy of the Vionnet book by Betty Kirke, which is a massive volume abundant with great background information and some meticulously recreated patterns from extant garments.

The most interesting thing I learned from reading it was that her technique of draping was made possible by textile innovation. Before WWI, most fabric was yarn dyed, which made the yarn lose some of it's twist in the process. With the development of larger dye vats after the war, it was possible to piece dye fabric after it had been woven - resulting in tighter twists. This led to the invention of fabrics better elasticity and suppleness, such as crepe, which has alternating S and Z twist yarn that balances warp and weft- thus creating a better bias.

Anyway, this book is full of illustrated patterns to show how each garment was constructed. I could make this book my only sewing to-do list for the next few years if I was crazy enough! The only issue is... there is absolutely no guide for measurement. So I'll be slowly working on trying to scale up this pattern to fit me. Wish me luck!

The Shape of Things to Come

Making do and Mending

This morning I was finally able to replace the covered button on my dress! Unfortunately, I couldn't get it done professionally as the woman who usually makes them wasn't in, but I was able to get a DIY covered button kit. The dress is fixed and wearable! My first project of the year is complete, and I'm so, so excited to start planning the next one. 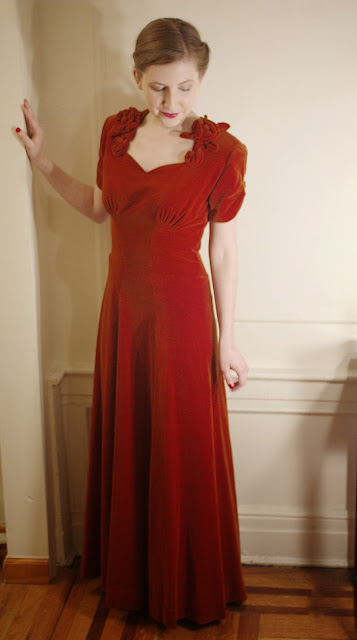 I love the long line and the cut of this dress, so when I saw it my first instinct was that it dated from the 1930s. When I tried it on, I was super surprised to see shoulder pads inside! I had always associated shoulder pads with 1940's fashion. So I did a little research and found that Elsa Schiaparelli was one of the first designers to make shoulder pads popular... in 1931! A little more digging showed that styles similar to this dress, with the front panel, gathers under the bust, and ruched sleeves were popular in 1937.


Last month, I found myself in this cute vintage shop called Seven Wonders while waiting for a friend. I wasn't quite finished with Christmas shopping, so I knew I shouldn't buy anything for myself, but then I spotted this dress... 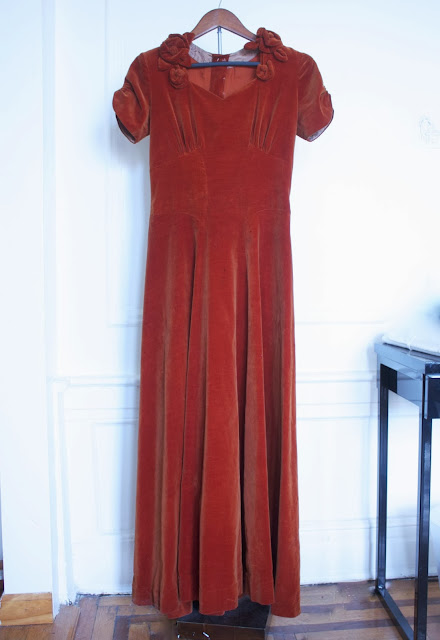 Everything else in the store was 70's - 90's vintage, but this dress looked like it was from the 1930's. I asked the owner about it and she gave me a deal I couldn't refuse. I brought it home with me to start my collection of (now numbering 2) 30's dresses. Unfortunately, the dress has quite a bit of damage and is missing the top covered button, but the details and construction are just wonderful. 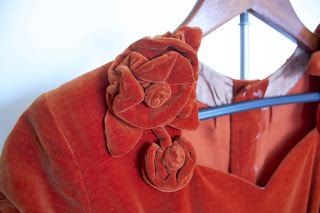 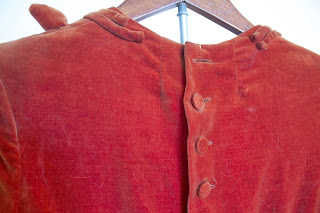 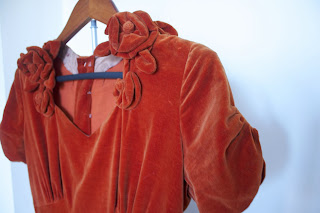 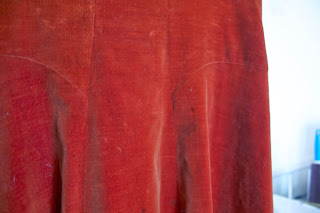 I've been following the The Dreamstress blog for a while now, and this year my resolution was to join in on her Historical Sew Fortnightly. It's a great sew-along where you complete a themed historical sewing challenge every two weeks. The first one of the year is "Make Do and Mend", and I thought my new dress might be the perfect candidate for the challenge.

Now, I know it might be a little controversial to mend or sew a dress that is this old, and I normally wouldn't. I have a few 20's dresses in my collection that I would never mess with even if they have rips and stains. But in this case I think I can mend it well enough (and discretely enough) to make it wearable without losing integrity as a lovely piece of costume history. I am going to reinforce some of the seams that have ripped open and see if I can find a little extra seam allowance on the inside to cut off and make into a new covered button.

Tomorrow I'm going to run over to Steinloff and Stoller in Manhattan to see if they can make me a similar button. I'll share the results as soon as I can!